We did it, but what a week we picked!  I have to say, it was much easier than I thought but it wasn’t without its tough bits!

I woke up so determined by this challenge, blasted out a post (so I didn’t back out) and was very satisfied with myself…until I opened the curtains to see three inches of snow and gale-force winds.  Crap bags.  What a day to ban the screen and promise to spend more time outside!

But we got on with it, bundled up and hit the pavement towards the Science Centre (Mr. BM had the car so we took the bus).  After a few choice words and a hellish bus ride we spent an awesome morning fishing for plastic fish, pretending to buy plastic food and eating hot dogs.

More snow. Ball bags. After a decent night’s sleep I was very encouraged by our new challenge.  The house looked like a crime scene and I was craving a hot drink but so far so good.  We bundled up (again) and went to the library, bought groceries and both boys passed out for their naps nice and early.

Just add hat, mittens and a scooter and we’re away 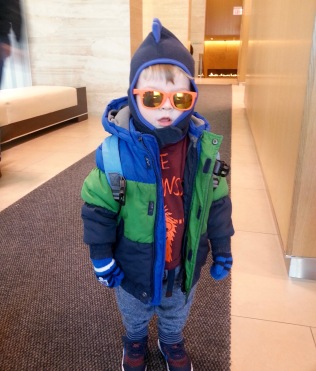 I sneaked an hour of TV and a HOT coffee before hiding the remotes again as the tornadoes awoke.

An afternoon of play at the Community Centre rounded off another good day.

Naaaaaah. Everyone woke up (at 5:30am) exhausted after a bad night of wake ups.  Breakfast was a battleground but it was the Lord’s daycare day so we bundled up, loaded the scooter and headed out.

A brisk 20 minute walk, drop off the Lord and load the General onto the scooter before heading to his toddler time class (which he cut short because he wanted to nap).

Normally, on a one-kid day I will have the TV on in the background so I can get the basic sanitary task done (clean the floor, do the dishes, etc) but not today…and it nearly killed me!  I was exhausted. But yet again we got through it.

By this stage of the week I was pleasantly surprised at how quickly time had passed. The Lord had had a terrible nightmare (so not strictly a night terror) the General woke several times so I ended up jarring my neck in the Pöang from 3:30am with a very comfortable (and heavy) General sleeping peacefully in my arms.

Another round of classes at the Community Centre exhausted the already shattered boys, so a good nap was enjoyed by all (I enjoyed mine with cheese on crackers and a hot cuppa!)

We had to wait in for the afternoon for a shipping company to assess how much crap we have to take to the UK in the summer (more on that in a later post!)  I was certain that this would be the breaking point…tiredness, idleness and indoors are a recipe for Paw Patrol on repeat!

But, yet again we surpassed my expectations and before I knew it, the boys were drowning bath toys and begging to go to bed early (huh?!)

Sensing a con in the making I prolonged the tidying up as long as I could but I was chuffed when both settled within 15 minutes and I was able to chug a glass of wine and cram in a Gilmore Girls episode before Mr. BM walked through the door with a South Street True North burger (Mmmmmmm).

Last night was the best yet (if you ignore the General in our bed at 4am) and everyone slept until after 6am – so a major win in our house!

It’s a cheat day for me because both tinkers are at daycare and the TV is well and truly on  (but let’s not forget the reason for this challenge – it’s not me that needs to stop waking up the whole house!).  The house is clean, the laundry is done and I am finally relaxed!

The daycare pickup was trouble-free but things gradually went downhill and bedtime took FOREVER!  Regardless of that – WE DID IT!  A full working week of no TV (I might let them sneak a peak at Paw Patrol over the weekend, if they’re lucky!)

Once I got over the tiredness of having to actually parent my tinkers without the help of the TV, it was surprisingly easy.  I expected lots of cries for Thomas et al. but alas they never came.  We read books, built Lego trucks and made train tracks (all of which we already did but this was serious Sodor Island-quality train tracks!)

This has been a turning point for our little unit…perhaps with some screen time moving forward, but certainly not as much as before!